Pursue your fitness goals long enough and life will inevitably smash you like a Mike Tyson left hook.

You know exactly what I mean.

Last minute travel for work. A sick kid that doesn’t sleep, and that gets you sick and now you can’t sleep. A surprise visit from the in-laws (“Hey guys! Just thought we’d surprise you. Mind if we stay for a week?”). The idiot driving the Prius who rear-ended the F150 on your evening commute… that backed up everything for another hour.

You see… real-life doesn’t care about your #fitgoals.

Just the other day life tried it’s damnedest to knock me off the rails as I was gearing up for a training session.

As I’m packing up to leave for the gym, all jacked up for an hour of much-needed Iron Therapy, my black lab gives me a strange look, followed by a sound that could be best described as a small dinosaur choking on a dish sponge.

Confused, I narrow my gaze. She then unceremoniously blows chunks all over our brand new carpet.

So I called an audible like Peyton Manning in his glory days.

In about as much time as it took for that Puppy Chow to regurgitate onto our brand new carpet, my sixty minutes of Iron Therapy magically turned into a 15-minute interval workout.

The easy thing to do would have been to skip the workout altogether. But having done this fitness thing for over a decade, I knew that was NOT the solution.

All that’s to say is that real life doesn’t give a crap about your fitness plans. But just because life tries its damnedest to throw you off doesn’t mean you can’t play hardball. Here are three ways to knock it out of the park next time life comes at you like a spider monkey.

1. Be flexible but remain committed.

While you may have the best of intentions, life will do what it can to make sure it disrupts those plans. That’s why you must be flexible but remain committed.

Bruce Lee is the epitome of this principle. He teaches us to be formless, like water. Think of the power behind a roaring river. A river carves the earth with its relentless flow. It’s consistent, powerful, and formless – it takes on the shape that it must. That’s how we have to think when attacking our fitness goals.

If you’re really pressed for time, modify your workout. Instead of a full-on strength workout with long rest periods, turn all the movements into a circuit and shorten the rest. Or, just knock out a high-intensity interval session on the assault bike, treadmill, or rower.

If you’re traveling and know you won’t be able to work out later in the day, then make it a priority to get it in first thing. Wake up a bit earlier, hit the crappy hotel gym and explore some new movements. You’ll perk up quickly, and as a nice bonus, you’ll be more likely to make healthy decisions for the rest of the day.

If you’re unable to make it to the gym, find simple ways to stay active. Take a walk with your family. Do a couple of big sets of push-ups and squats at home. Go for a jog. Rearrange your living room. Ok, that’s a stretch, but you get the point.

2. Move past motivation and own your emotional state.

Motivation is a cruel lover. One day she’s there, showering you with Chipotle burritos and back rubs. And the next day she’s gone, leaving you with an empty bed and a lingering smell of JC Penny’s perfume.

Depressing, sure. But that’s the reality of motivation. It’s fleeting. The very nature of motivation is that it ebbs and flows, and relying on it is a strategy destined to fail.

Think back to how you felt immediately after you made any big declaration in your life. You probably felt highly motivated and ready to make big changes. And that’s great. The issue is that as humans, we’re really bad at predicting our future state. We assume that we’re going to be in the same state (motivated, ready to change) in the future. But that’s far from reality.

If you want to make killer progress in any area of life, you must be in control of your state. Emotion is created by motion. Our emotional state is strongly connected with movement (or lack thereof).

Tony Robbins explains, “To change your mood, you can do something as simple as adjusting your posture. You can make eye contact with the people around you. You can smile, just to trick your mind into thinking you’re feeling better than you actually are. Eventually, your emotions and mindset will follow suit.”

A simple trick that I love is what’s called priming – it’s a state management technique I learned from my rugby days. It looks kind of silly, but it works like a charm to loosen up, boost focus, and increase energy levels.

This is a quick and effective way to ramp up the nervous system and improve your state. Next time you’re feeling down and not really wanting to do much – stand up, prime, and go kick ass.

There’s a dead-simple way that you can make working out a habit: make it inevitable.

The simplest way to make this happen is to ritualize your training time.

And that means you need to define exactly what, when, and where this thing is going to happen. This is called an implementation intention and research shows that this dead simple step leads to a massive increase in follow-through.

Eventually, the clouds will break and you’ll have formed a new habit. You’ll know it’s taken hold when you feel pulled to go to the gym.

A collection of the most important daily mental health habits for improved wellbeing and emotional balance I got an... 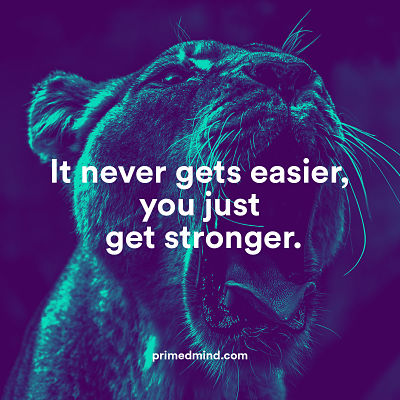